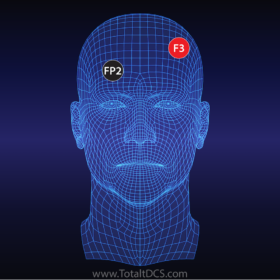 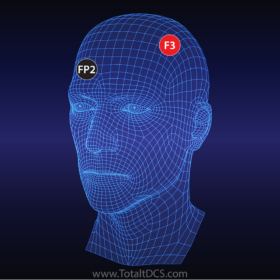 It has been well documented that Transcranial Direct Current Stimulation (tDCS) applied using this electrode placement montage has ability to produce improved mood in those suffering with depression. Furthermore, this montage has been shown to alleviate symptoms in certain cases of severe treatment-resistant depression, Seasonal Affective Disorder (SAD), and Generalized Anxiety Disorder(GAD).

Research into Transcranial Direct Current Stimulation’s and its potential as a non-pharmacological treatment option for depression dates back as far as the 1960’s. While early research struggled to determine optimal electrode placement, current tDCS research focuses on Anodal stimulation of the Dorsolateral Prefrontal Cortex and Cathodal stimulation of the right Supraorbital area, as the benefits produced from this placement far outweigh those of other montages. Most commonly a current of 1-2mA is applied to the scalp using 3×3″ electrodes, for approximately 20 minutes at a time.

One notable study utilized 1mA of current for 20minutes, every other day for 5 days. The results were incredible, showing that 80% of participants receiving tDCS stimulation showed a significant 60-70% reduction in their depression symptoms, according to the Hamilton Depression Scale (HAM-D) and the Beck Depression Inventory (BDI) respectively.1

A second study worth mentioning focused on tDCS’s ability to combat depression versus that of Fluoxetine (Prozac), a popular prescription anti-depressant. This double-blind clinical trial contained 40 patients with major depression not currently taking medication for their symptoms. tDCS or sham (fake) stimulation was applied during ten sessions over the course of a two week period. Those who received active tDCS stimulation displayed a 42.1% reduction in their BDI scores, compared to only a 15% BDI score reduction in patients who had been taking Fluoxetine for the same period of time. It wasn’t until after 6 weeks of administration that both groups displayed a similar reduction in BDI scores, showing depression relief was experienced markedly faster with Transcranial Direct Current Stimulation compared to  Fluoxetine administration.2